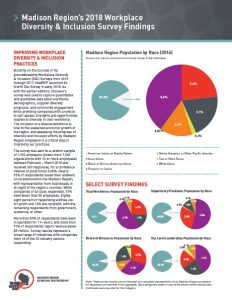 In the 5/31/18 edition of eNews, we reported on the newly released overview of the findings for this year’s Madison Region Workplace Diversity & Inclusion Survey.

As reported earlier, that survey was conducted in February and March when a random sample of 1,903 employers with 10 or more employees were asked to participate.  Of that number, 367 companies and organizations completed the survey, for a confidence level of plus/minus 5%.

Since the release of the overview findings in May, the final report has been released. As this was the third year using the same survey, we are now beginning to develop a baseline of results to better identify potential trends moving forward.

“A number of the metrics measured in the survey are moving in a positive direction over time, which is encouraging,” said Gene Dalhoff, MadREP V.P. of Talent & Education.  “However, there is much work for our region to do before we are seen as a model for diversity and inclusion in the workplace.”